Josh still dreams of making it at Stamford Bridge

Josh McEachran played Champions League at 17 and was tipped to be Chelsea’s next big thing… now he is on loan in Holland but still dreams of making it at Stamford Bridge
– Josh McEachran was tipped to be Chelsea and England's next big star
– The midfielder made his Champions League debut at just 17
– McEachran was loaned to Swansea, Watford, Wigan and Middlesbrough
– The 21-year-old is now out on loan at Vitesse Arnhem in Holland
– McEachran still dreams of becoming a first team regular at Chelsea

Josh McEachran reported in club-issue chinos, blue cotton shirt and a flimsy black jacket. The dress code added nicely to the European vibe, but the upturned collars offered little protection against the icy gusts, licking across the Rhine.

There was a smattering of applause from a few who braved the wind-chill to greet the Vitesse Arnhem players as they trundled kit bags across the flat expanse of car parking around the Gelredome.

It is three years since he last appeared for Chelsea and here McEachran was preparing to start only his second game of this season, against Dutch league leaders PSV Eindhoven.

After a sticky opening to another loan spell, there have been recent flickers of progress and hints that he might recapture the drive to fulfil potential which generated such hype when he first emerged at Stamford Bridge.

‘All that did change my life, to be fair,’ said McEachran. ‘I was 16, 17 at the time. I’d wake up and be in the papers every day. I wouldn’t say it was hard, but it was different. You’ve just got to get used to it, haven’t you, really?

‘It happened so quickly. I went from playing at Cobham for the youth team to all of a sudden playing in the Champions League. It all changes. So it was a bit crazy and there was pressure, but I loved it, to be honest. It was a good feeling.

‘They were nice things people were writing and saying and I want that back. I just want to get back to that, and I’m working hard to get back to that. There’s no reason to think I can’t. So many players in the Premier League fulfil their potential at 24 or 25. I’m only 21.

‘Even in Holland where teams are very young I’m one of the youngest. People forget, when I first came in, I was 17 and I was at one of the biggest clubs in the world, with all this expectation. That’s still my dream, to play for Chelsea.’ Carlo Ancelotti was digesting his tortellini when he set down his fork to challenge the theory that Chelsea’s youth system was failing.

Ancelotti told the reporters he had invited to dinner that there were two teenagers in the ranks who could make it to the first team: Josh McEachran and Nathaniel Chalobah.

Five years on and Chalobah, unable to get a game on loan at Burnley, seems set for another move, although a proposed switch to Bordeaux has collapsed.

His momentum has stalled like McEachran’s, and Jose Mourinho is turning to younger players such as Dominic Solanke and Izzy Brown. Here is further evidence of the blocked development pathways which inspire such debate in English football.

Within months of Ancelotti’s mid-pasta declaration, McEachran was a key figure as Chelsea won the FA Youth Cup and England won the European Under 17 title.

He made 17 appearances in 2010-11 and, at 18, signed a contract worth £2million a year, at a time when Roman Abramovich obsessed about Barcelona’s ability to rule the world while ‘growing their own’.

England, meanwhile, were sifting through the debris of the 2010 World Cup campaign and McEachran’s accelerated development had everyone talking.

Things changed when Ancelotti was fired and Andre Villas-Boas swept in. McEachran was among those exiled to the academy block, as AVB decided the first-team building at the training ground in Cobham was strictly for first- teamers only.

He avoided the worst of the trouble as some young players were sacked or sold for disciplinary reasons, but it was here where big money met rejection and idle time and things began to unravel.

It must be tempting to wonder how it might have panned out had Ancelotti stayed.

‘You can’t look back,’ said McEachran. ‘That’s nothing to do with me. It’s down to the club.

‘Chelsea is one of the best teams in the world. For a young player to walk in is pretty hard. All of us know we have to go out and find experience.’

There were disappointing loan spells at Swansea, Watford and Wigan and a season at Middlesbrough which started promisingly but faded.

The social opportunities which all too often appear for young players with seven-figure salaries did not help, and it is hard to escape the feeling that the next five months at Vitesse will ultimately dictate the rest of his career. 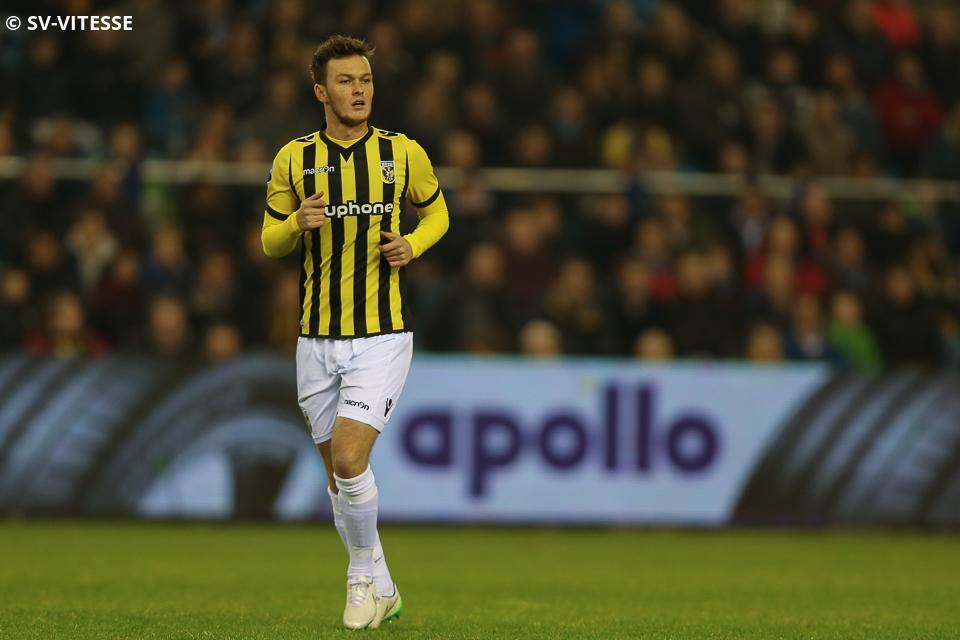 Arnhem has its distractions, too, but can its relative isolation focus his mind and refuel his desire?

‘It was hard at first in a different country with no-one around me,’ said McEachran. ‘I missed most of pre-season because I was injured and didn’t arrive as fit as I should have. I was struggling with my ankle. So, I needed time to catch up. Then I got fit and injured my ankle again, so then I went back to Chelsea for about a month.

‘The lads and the staff here have been great. I’ve been doing extra work with the sports science people, getting in the gym after training.

‘I feel as fit as I’ve ever been. I feel I’m heading in the right direction.

‘The way Vitesse play is perfect for me, through the midfield. I feel good. I just need to keep it. I need to be able to last 90 minutes.’

Eddie Newton, responsible for liaison with the 27 Chelsea players out on loan, was at the Gelredome and met McEachran on the morning after the game.

‘They don’t forget about you,’ said McEachran. ‘It doesn’t feel like you’re not part of the club anymore.

‘At the moment, I’m concentrating on Vitesse and I’m not looking beyond that. When the end of the season comes, I’ll cross that bridge. It’s down to Jose Mourinho.’ 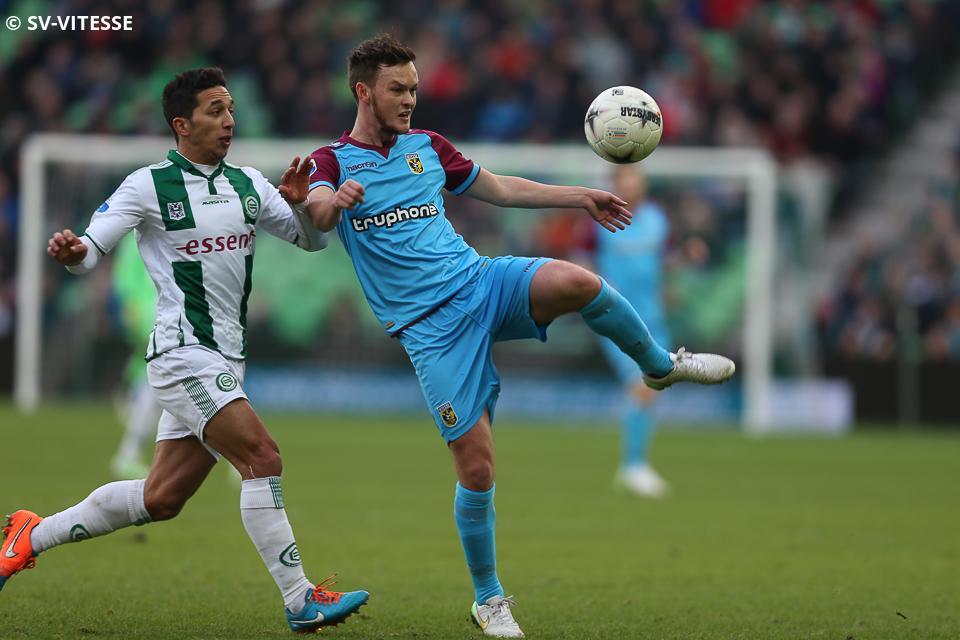 Oxford-born McEachran has been at Chelsea since he was eight. He is the last of the 2010 Youth Cup winning side still there. His contract expires next year. He still has admirers at the club. Mourinho is probably not the biggest.

Peter Bosz has been charged with coaching some of Chelsea’s most promising talents in his role at Vitesse, but he knows the likes of Gael Kakuta and Lucas Piazon would not have been sent his way if they were the finished article.

His challenge is to improve them at Papendal, the club’s fabulous training facility.

In the 1-0 defeat against PSV, McEachran performed deep in midfield with the same effortless poise and vision which caught the eye at 17. When the game passed through him, his contributions were pleasing and yet he did not impose his ability and dominate as you always hope he will.

Perhaps confidence has been eroded over the last three years. Perhaps it is just his nature. Off the pitch, McEachran is polite, without a trace of cockiness.

‘He’s a quiet boy, with a good attitude and everybody loves him,’ said Bosz. ‘I’m sure he’s been affected by what’s happened to him. At 17, you think you’re a man but you’re still a kid. Of course these things will affect you.

‘There’s a lot of attention from the press and the fans and it changes you. It’s normal. Under Ancelotti he was playing, he was important; he was seen as a big talent. Then, Villas-Boas wanted adult players in those positions, like Ramires. Josh was pushed to the side and his levels dropped. That happens with young players.

‘It’s a question of how quickly you come out of that period. For him, that period has been really long.

‘But he says he is happy here and feels accepted. I hope the way up is from now on. I cannot do it for him, but I can help. That’s why I’m a coach.’

A personal training programme was designed for McEachran to boost fitness levels which had dropped after so long without regular football.

‘He needed time, so we gave him time to adapt to us,’ said Bosz. ‘Also, his fitness; he was not fit when he arrived but before the winter break we saw progress. In the last three months he has done fantastic.

‘He is an intelligent player, with a tremendous left foot. He sees things quickly. On the ball, he is fantastic. He has to improve on his defensive side. In the duels he has to be stronger.

‘Can he reach the top? With him it is difficult to say. He will play at a good level, for sure. At the top? That is something different.

‘A lot of players can have a good career without reaching the top. It depends. He’s still young. He has to show us. I don’t know where it ends. It’s up to him.' 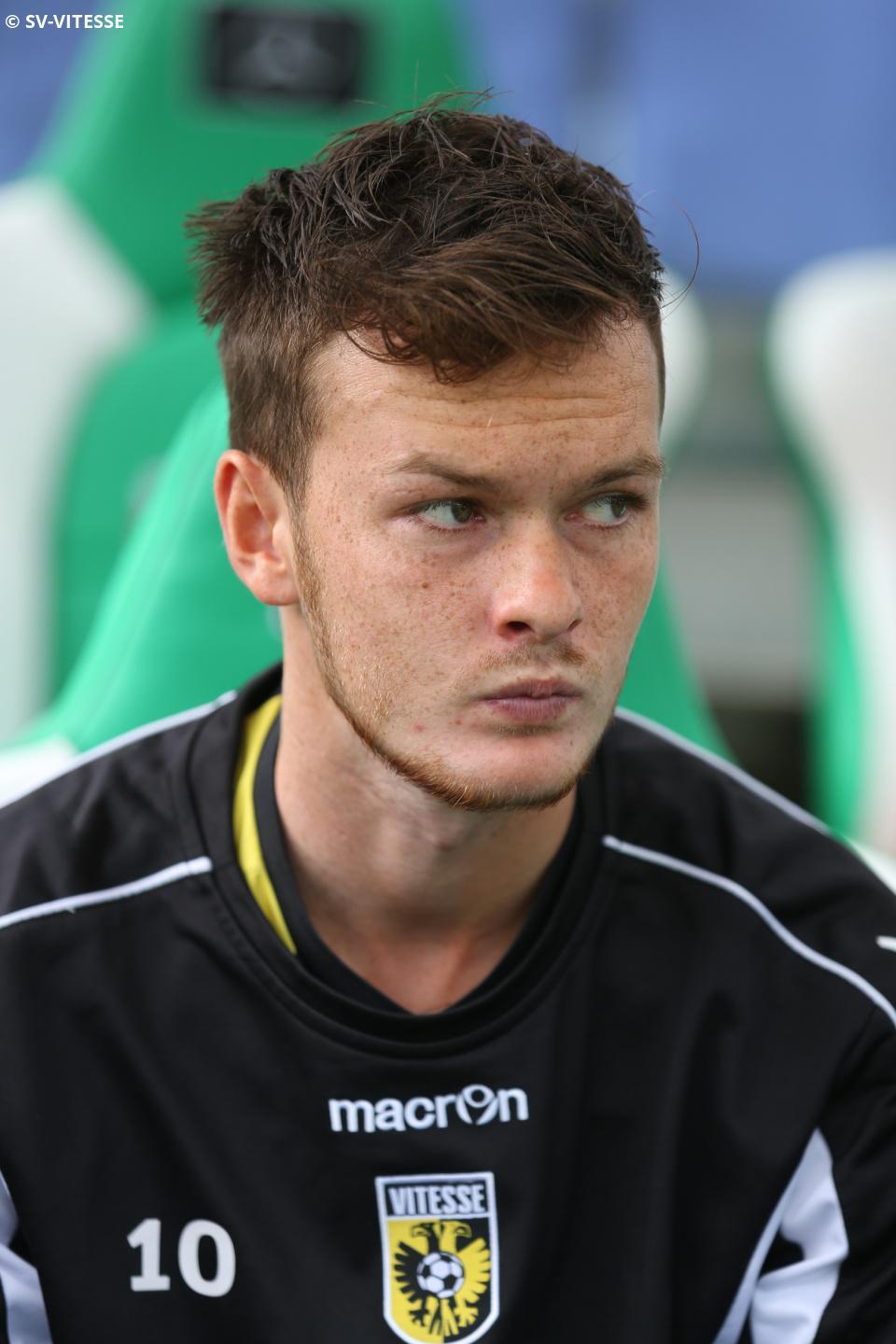