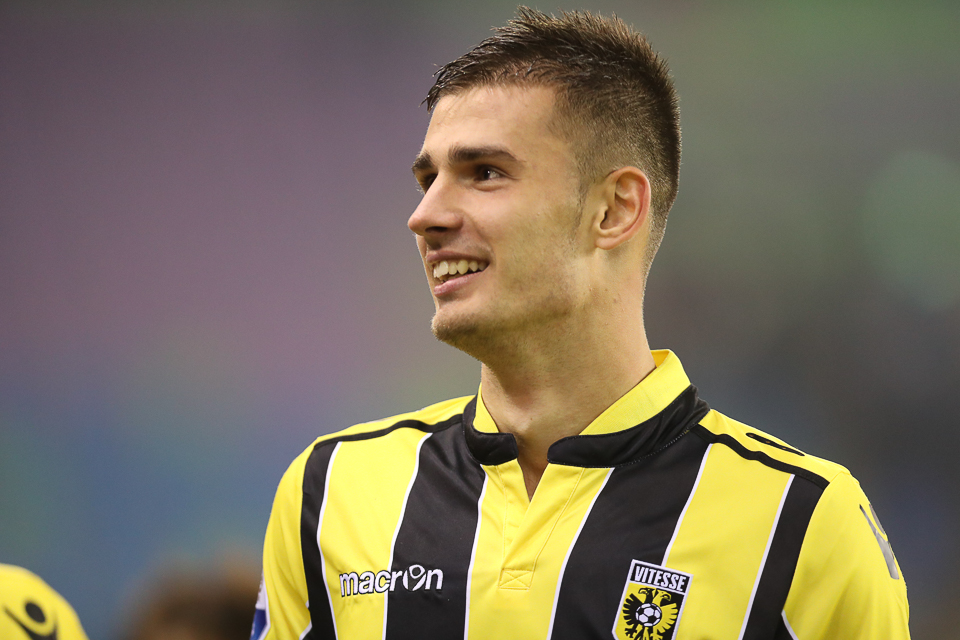 Dutch club Vitesse has played 34 competitive matches this season in the Eredivisie and Europa League combined. Defender Matt Miazga has appeared all but two of them.
In his second season on loan in the Netherlands, Miazga has established himself as a stalwart in the starting lineup. Now in his sixth camp with the U.S. Men’s National Team, he hopes to similarly entrench himself on the American back line.

Miazga stands at the forefront of a talented corps of central defenders on a 23-player roster that brims with opportunity for young players. His four caps represent the most of any center back called to Cary.

“Every time there’s an international FIFA date, I want to get called up by the U.S.,” Miazga said. “It’s a huge honor and a huge privilege. Every time I’m here I want to give it my all, impress and wear the crest with a lot of pride. I’ve been getting a lot of significant minutes at Vitesse and I’ve been playing well, always improving and getting that experience. I work really hard to try to consistently get called up.”

Shortly after making his MNT debut in 2015, Miazga signed with English Premier League powerhouse Chelsea in January 2016. The following summer he moved on loan to Vitesse in the Netherlands, found his way into a regular role midway through the season and helped the club to its first hardware in 100 years of existence when they lifted the 2016-17 Dutch Cup. The rising center back has continued to be a fixture at the GelreDome, logging the fourth-most minutes for the side this season.

Several other young MNT defenders are overseas attempting to establish themselves professionally. Shaq Moore has earned his first senior call-up in the midst of a breakthrough season at Levante in Spain. Erik Palmer-Brown recently made a loan move to Belgian club Kortrijk, and Antonee Robinson has started to secure a regular starting spot while on loan at Bolton in the English League Championship. Cameron Carter-Vickers, on loan at Ipswich Town, also returns camp after he picked up his first cap last November in Portugal.

READ MORE: Five First Time Call-Ups Who Could Make an Impact with the MNT

“Both Matt and Cameron, each have been logging significant minutes and playing important roles for their clubs,” head coach Dave Sarachan said about their selection for the MNT roster to face Paraguay on March 27. “Each made a good impression on me when we had them in our roster against Portugal last November, and I think this is just a continuation of giving these guys more minutes in a game in an important position for us.”

Though the young defensive brigade in Cary includes some new faces, four of the players represented the USA together at the 2015 FIFA U-20 World Cup in New Zealand: Carter-Vickers, Miazga, Moore and Palmer-Brown. It’s reflective of the roster as a whole, which features 12 players that have worn the crest for the U.S. at a Youth World Cup.

“We’re all excited to be a part of it,” Miazga said. “We’re comfortable with each other from playing in the past. I know them well and they’re very talented players.”

Carter-Vickers and Miazga anchored the U.S. defense in New Zealand as well as at the 2015 CONCACAF U-20 Championship. The pair held down the center back spots in all but one game at both tournaments. Their senior debut as a duo came against Portugal, when Carter-Vickers entered the game as a substitute at the start of the second half. Their chemistry has facilitated their transition to the full National Team as familiar teammates on-the-field and frequent roommates off of it.

“I know him well, he knows me well.” Miazga said. “We’ve played a lot of games together. We know each other’s tendencies. If we get a chance to play together, I know that we’ll be ready and give it our all.

Now vital with Vitesse, Miazga has another chance to prove himself on the international stage. The friendly against Paraguay serves as a prime opportunity for the team’s young core to make a mark. Miazga hopes that the USA’s new young guns can start to go from youth movement to MNT mainstays.

“There’s a lot of young, talented players here,” Miazga said. “We’re all ready to make an impression. Hopefully this generation can be a staple moving forward in the National Team program.”